Grotthus’ view was recognized by his contemporaries. In 1903, the Nobel Prize in Chemistry was awarded to Svante August Arrhenius (1859-1927). His Nobel Lecture, given on December 11, 1903, “Development of the theory of electrolytic dissociation” credited Grotthuss’ ideas: “According to Grotthus’ conception, which at that time was generally accepted, the electrical current passes through a [salt] solution in such a way that the conducting molecules, e.g. of potassium chloride (KCl), separate into their ions, which recombine [with a different pair] […]. That is Grotthus’ view; it presupposes continuous splitting and recombination of the salt molecules.”

Theodor von Grotthuss (January 20, 1785 – March 26, 1822) was born in Leipzig, Germany, during an extended stay of his parents away from their home in northern Lithuania. Since 1808 he lived at his mother’s estate in northern Lithuania (Gedučiai village, Pakruojis municipality district, Šiauliai county) and continued his research. Gedučiai village is located not so far from the town Žeimelis (Fig. 1). There he conducted research on electricity and light with the limited research equipment he could assemble. During this period Grotthuss formulated some original ideas pertaining to the absorption of light, which included phosphorescence, fluorescence, and photochemical reactions.

While studying the crystals exhibiting phosphorescence, in 1812 he observed that the phosphorescent light was different from the absorbed light. He concluded that the phosphorescence phenomenon was associated with the motion of light and the structure of the body being irradiated. He proposed that the light at the surface of the fluorescent crystal would split into +E and –E components, which interacted with polarized molecules in the crystal, got separated, and caused the emission of light of a different color from that used for irradiation, i.e. he presented the theoretical foundations for luminescence, which were later elaborated in the second half of the 19th century by A. E. Becquerel, D. Brewster, and A. D. Stokes.

In 1815 he published a paper “On an Absorbent of Light and Some General Considerations Concerning the Phosphorescence and Colors”. In 1817 he discovered the effect of light on chemical processes and proposed the following rule: “only that light which is absorbed by a system can bring about a photochemical change.”

In 1818 Grotthuss attempted to develop a unified electromolecular concept of physical and chemical phenomena. In 1819 he published a paper “Über die chemische Wirksamkeit des Lichtes und der Elektrizität” (“On the chemical action of light and electricity”), where he proposed that the combination of different types of electricity (+E and –E) produces heat. He also suggested that the light is emitted, if the combination of different kinds of electricity is prevented by the atmosphere or an insulating layer, and the color of the emitted light is determined by its vibrations. He concluded that “+E and –E” are the original [energy] sources for light, heat, and electricity, which are different modes of [energy] manifestation.

The last part of this paper elaborated on his ideas presented in the first paper on the electrolysis of water. He stated that there is a continuous exchange between molecules and their elementary parts in solution even in the absense of the electrical current. These are closed circles of exchanging charged entities. This cannot be observed in solution because of the established equilibrium between the electrical forces. An external force destroys the equilibrium and the closed circles are opened. Molecular chains are formed and are stretched between the electrode poles. At the end of the chains, at the electrode poles, the cascading molecular elements of water molecules are separated. This describes implies Grotthuss’ proposition that molecular fragments exist in solution. Fifteen years later Faraday presented his electrolysis theory, where he established these fragments to be ions.

Having studied the tendency of metals to be either oxidized or reduced during electrolysis, Grotthuss concluded that (–E) in all metals is chemically bound. We quote his powerful statement verbatim: “Auf jedem Fall halte ich es für gewiss das alle Metalle –E chemisch gebunden enthalten … [In every case I hold it for certain (I am firmly convinced) that all metals contain a minus E which is chemically bound.]” Almost 80 years later, in 1895, J. J. Thompson established the presence of an electron as a basic component of nature.

A few photochemical dependencies were named after T. Grotthuss. While studying iron (III) thiocyanate alcoholic solutions, Grotthuss observed that the solution faded when exposed to light and that the rate of fading was proportional to the duration of the exposure and the intensity of the light. Consequently, in the study of thiocyanate and cyanide complexes of iron (III) and cobalt (II) he discovered the basic laws of photochemistry: the photochemical reaction could be caused only by the light absorbed by the substance and its rate was proportional to the time of exposure and to the intensity of the light. These observations by Grotthuss were confirmed some 20 years later by J. F. W. Herschel and J. Draper. Eventually, these conclusions became known as the Grotthuss-Draper first and second laws of photochemistry.

The professorship at the Dorpat (now Tartu) University was offered to him in 1814, but he refused to take it on a basis of health problem. T. Grotthuss then joined the activities at the Peter’s Academy in Jelgava (Mitau), close to his mother’s estate. As a result of great suffering, he committed a suicide on March 20, 1822 at the age of thirty-seven. He was buried in his mother’s estate.

T. Grotthuss searched for the secrets of nature, and thereafter he has remained a beacon of light. As he wrote Lux lucet in tenebris quamvis nihil obscurius luce. [A literal translation: Light shines in darkness, however, nothing darkens the light.].

The place where, we believe, Theodor von Grotthuss has performed his unique experiments, the estate still exists in Gedučiai village in Pakruojis municipality district. However, the current condition of the buildings is an unfortunate emergency (Fig. 2 and 3), but the local community plans to write a project proposal to restore the estate for tourism and history purposes. Žiemgalos museum, which is centrally located in Žeimelis, plans to recreate the equipment used by Grotthuss and to establish an educational laboratory for visitors and schoolchildren. The street that connects Žeimelis center to Gedučiai village is named after T. von Grotthuss („T. Grotuso g.“ in Lithuanian, Fig. 4). In March 2022, the bronze sculpture of Theodor von Grotthuss was established in the main square of Žeimelis (Fig. 5), in front of the museum.

The 2017 will mark 200 years since Theodor von Grotthuss formulated the first law of photochemistry. Grotthuss’ scientific contribution was additionally recognized by declaring his workplace an EPS historic site in 2022.

Written by Aivaras Kareiva (Chairman of T. Grotthuss Foundation at the Lithuanian Academy of Sciences) and Juozas Vidmantis Vaitkus (President of Lithuanian Physical Society) in 2021. Reviewed by Andrius Juodagalvis in 2022 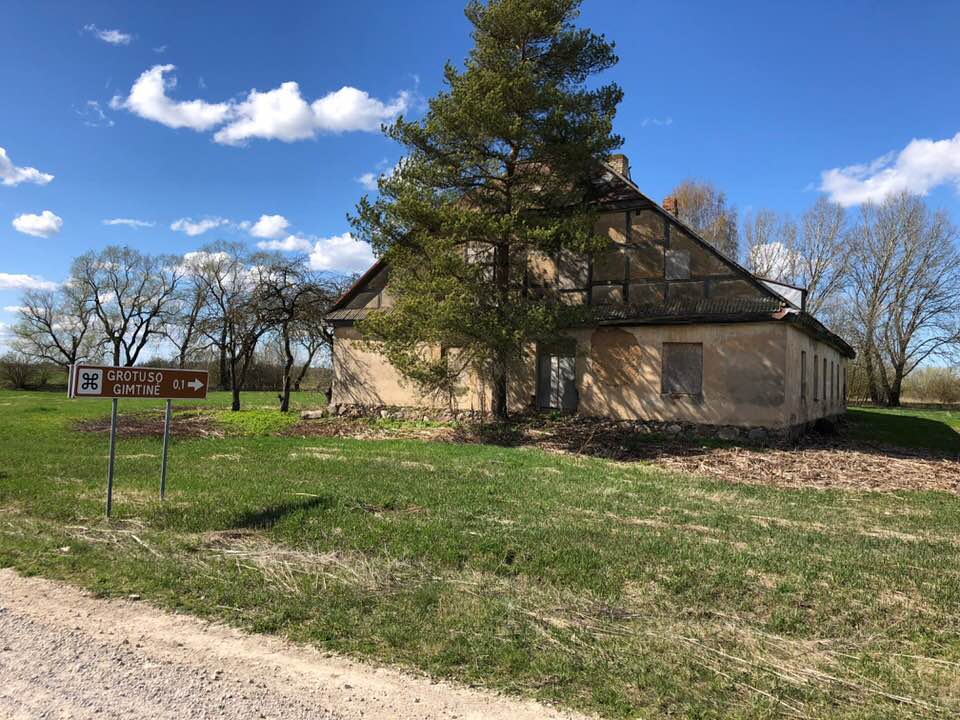 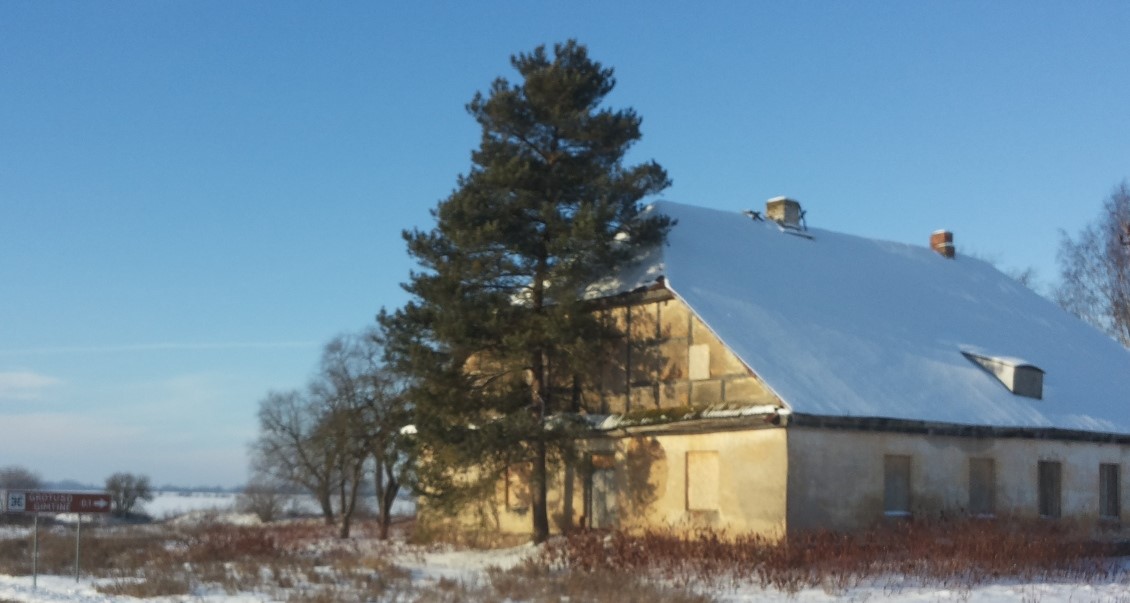 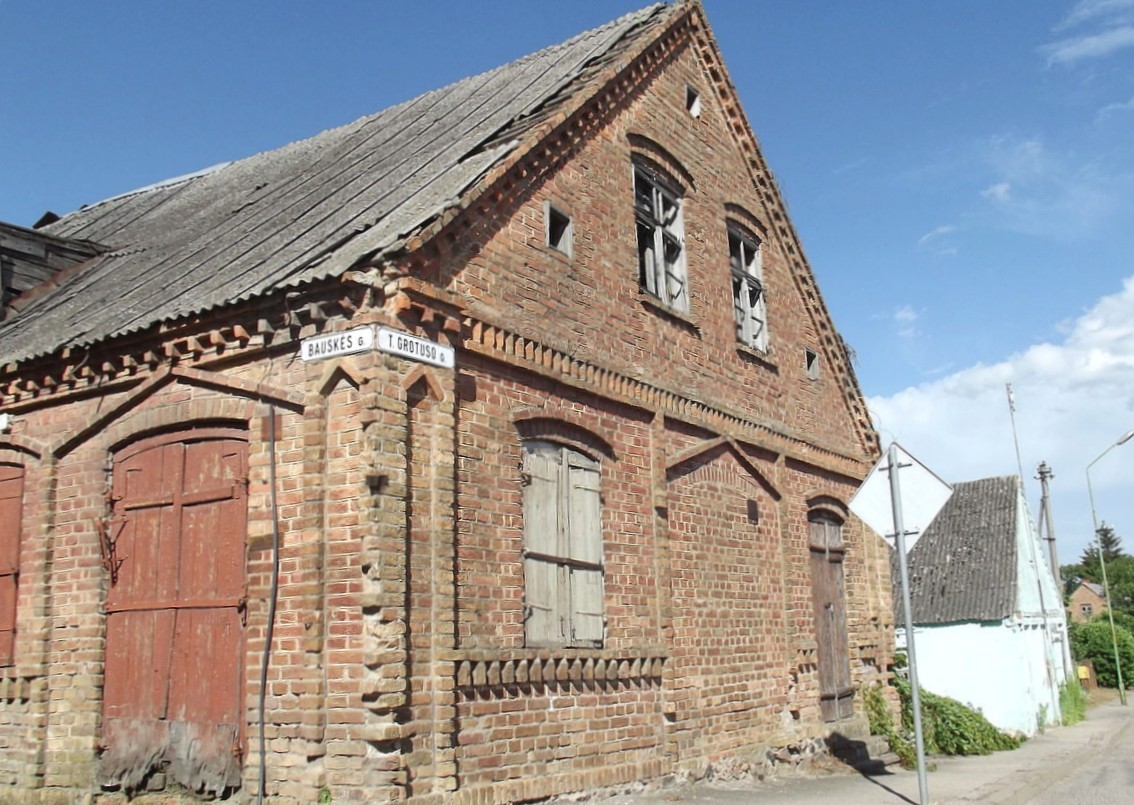 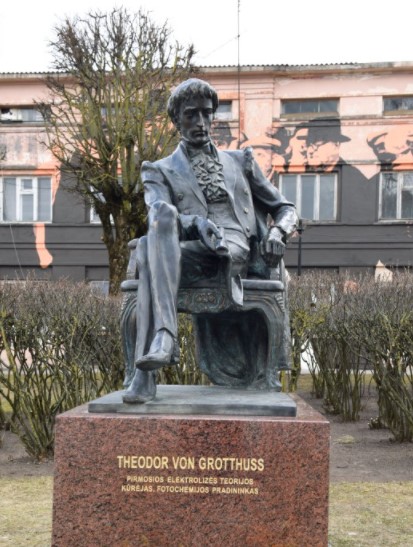